I’d never had a place that was mine.

Battling addiction was just the first step in a long journey toward healing for Jerrod and his family. He has come through more than a decade of substance use disorder, a lifetime of adversity and a history of generational trauma. Now on the other side, with a home for his family and big plans for the future, he says he didn’t do it alone.

“CCC gave me a stable foundation,” he says.

Jerrod, a member of the Anishinaabe-Ojibwe peoples, grew up in rural Montana. As a teen, Jerrod started drinking as a way to cope with his emotions. “I was in pain and dealing with a lot of hurts,” Jerrod says. Eventually, he found his way to Oregon, where he dove deeper into drug use.

“I lived to use and used to live. I just stayed loaded all the time.”

Then, when his youngest daughter was born, Jerrod says Indian Child Welfare services was ready to take his kids away. The prospect of losing his children was a wake-up call.

Starting on the Road to Recovery

“I realized I needed to change my life,” says Jerrod.

“NARA saved my life. They opened the doors to culture for me,” says Jerrod. It was a turning point.

But when he came out of treatment, finding a stable place to live was a challenge. He was a full-time student, earning a degree in alcohol and drug counseling — and suddenly he was also a single father responsible for three children. He moved in with family, but there wasn’t room for everyone. It was a stressful time. “I needed to maintain my sobriety, and find a safe place for my kids.”

He felt stuck — and knew he needed urgent help.

Jerrod called on supporters he could trust: he reached out to CCC. Soon, there was a place for him and his children at CCC’s Hazel Heights apartment building. Jerrod and his family were among the first residents when the building opened in 2018. 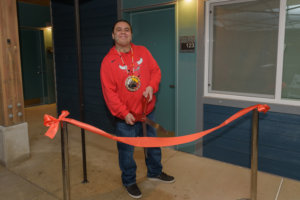 Jerrod proudly cuts the ribbon at the grand opening ceremony for Hazel Heights in 2018. During his time there, he found his footing and started building toward a healthy future.

“Hazel Heights gave me a stable foundation. It was huge for me. I’d never had a place that was mine.”

At Hazel Heights, Jerrod discovered a community. With encouragement from Hazel Heights staff, he started a Wellbriety program, where residents could share their experiences in recovery and support one another.

“The staff at Hazel Heights really care. They make you feel loved, wanted, needed. They give us the space to grow, to do what we want and need to do.”

With a safe place to call home, Jerrod was ready to start forging a new path for himself and his community.

Forging a New Path to Help Others

Jerrod’s time at Hazel Heights, combined with his experiences at NARA and guidance from his elders, inspired him to take a courageous step. He founded Painted Horse Recovery, a nonprofit organization designed to provide peer recovery support for people in the Native American community to heal from addiction and reconnect with traditional culture, values and belief systems.

“I learned we need continued culture, continued support after treatment and a safe space that is all our own,” he says.

After three years at Hazel Heights and eight years of sobriety, Jerrod has moved into a house out in the community. It feels good to have a home all his own, with space for his whole family and room to grow and build Painted Horse Recovery. He’s ready to share what he’s learned.

“My life was bad before. Now I’m in a good place, physically, mentally and spiritually. My kids are healthier. They have their own space. They finally feel safe.”

Learn more about how CCC provides affordable, supportive housing for clients on the path towards self-sufficiency, no matter where they are on their journey.