Sean Hubert joined CCC in 2007 after a decade managing affordable housing communities in Oregon and Washington. Sean has overseen over $340 million in real estate development at CCC including 1,650 units of housing created or preserved and over 150,000 square feet of clinic and service space. As Interim President & CEO, Sean oversees all aspects of the organization. Additionally, he is responsible for collaboratively developing, communicating, executing and sustaining CCC’s strategic initiatives. He also supports CCC’s communication, policy and advocacy work to improve overall systems alignment for comprehensive and effective housing, health, recovery and employment approaches.

CCC’s real estate portfolio consists of approximately 2,115 units of affordable housing and several clinical, commercial, and administrative facilities. CCC’s housing and services team serves about 3,500 people each year who are homeless or at risk of homelessness, and provides a diverse range of supportive housing programs including those helping people in recovery from drug or alcohol addiction, homeless veterans, re-entry programs for people exiting the criminal justice system and housing integrated with health care programming.

Sean is active in a number of community and industry efforts. He has served as a board member of Housing Oregon (formerly Oregon Opportunity Network) and the Oregon Facility Authority, and has been an advisory member to several local and statewide initiatives. He holds a Bachelor of Arts in English and Communications from Shippensburg University and is a licensed property manager in Oregon. Before joining CCC, Oscar was the chief human resources officer at Holiday Retirement, the largest independent living company in the country for older adults.

Oscar has held executive-level positions at Nike as head of human resources for its US, European, Middle Eastern and African businesses. Oscar’s Puerto Rican heritage, his family upbringing, and his professional experience and volunteer work have given him a better understanding of the challenges and opportunities facing people in diverse organizations.

Oscar has been involved with several nonprofits, including Aspira, United Way, Lines for Life, Junior Achievement, Tualatin Valley Youth Football and Beloit College. He earned a Bachelor of Arts in Political Science and Government from Beloit College, and his Juris Doctor from McGeorge College of Law. 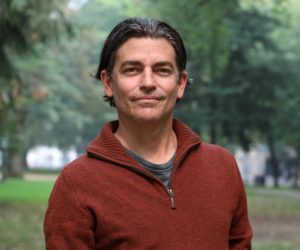 During his tenure, Andy has elevated and diversified CCC’s service level to offer a broad array of treatments that match client needs. As CMO, Andy has oversight and responsibility for the agency’s medical and clinical services, provides leadership to staff, helps set the agency’s strategic direction, and promotes ethical and quality care.

Andy is board certified in Addiction Medicine and Family Medicine. He graduated from the University of Portland and trained as a medical student and family physician at OHSU. He worked at Providence Health Systems and CleanSlate Center, and co-founded an outpatient integrated treatment program called HealthWorks NW. David began his legal career in civil litigation representing employees and citizens in employment discrimination and police misconduct claims. After moving into a role as corporate counsel for an international not-for-profit organization, David designed and implemented the organization’s compliance and ethics program, which covered more than 2,000 employees across 27 countries.

David’s work has spanned health care, education, technology and data analytics. He also teaches in the Masters of Legal Studies program at Seattle University School of Law, specializing in courses related to compliance, risk management, and organizational investigations. He is passionate about social justice and serves on several nonprofit boards. He volunteers his time with several free and low-barrier legal clinics and serves as pro-bono counsel to several nonprofits. He received his Juris Doctor from Seattle University School of Law. Peter joined CCC in 2021 and brings extensive business experience including government and nonprofit management. Since 2013, Peter served as the CFO for Home Forward, the largest provider of affordable housing in Oregon. In 2020, Peter was recognized as a CFO of the Year Honoree by the Portland Business Journal. Though he has wide experience in a range of strategic and financial functions for multiple industries, the bulk of his career has been in the service sector. Prior to working at Home Forward, Peter was Controller for Thresholds, Illinois’ largest non-profit mental health provider.

Peter is the Board President of Janus Youth Programs and Treasurer of Housing with Services LLC. He holds an Master of Business Administration from Northwestern University’s Kellogg School of Management, a Bachelor of Science in Accountancy from DePaul University and passed the Illinois CPA exam. He is also an adjunct professor at Portland State University’s School of Business and a member of the Oregon CPA society.

Peter is a big believer in combining employment, healthcare, and housing resources to improve lives. He is motivated to help CCC maintain a strong financial position in support of that cause. Mercedes Elizalde is the Public Policy Director at CCC. Mercedes works to bridge the gap between direct service and public policy advocacy. As public policy director, Mercedes collaborates with government agencies and community organizations to advance policy initiatives in support of CCC’s mission. Mercedes is responsible for policy analysis, advocacy, public education, and coalition-building efforts to find support and solutions for CCC clients and programs.

She brings a unique set of perspectives and knowledge to her work, having experience in direct service as a social worker and program coordinator, a legislative aide to an elected official and as a community activist. Mercedes was the first in her family to attend college and now holds a Bachelor of Arts in Psychology with a minor in Women and Gender Studies and a Master of Arts in Nonprofit Leadership. Juliana joined CCC in 2020 and leads the Public Affairs, Fundraising and Communications departments. Her passion is to educate the public about the critical services CCC provides to our community.

Before joining CCC, she spent the bulk of her career in the film and advertising industries. As the Principal and Owner of @Large Films, a national commercial production company based in Portland, Juliana has produced and directed commercial projects that have won Emmy, Addy and Telly Awards. As a commercial director, she created award winning content for clients including Nintendo of America and Banfield Pet Hospital among others.

Juliana also spent a number of years as a community organizer for the Central Eastside Industrial Council in Portland where she worked closely with the City of Portland and Multnomah County to establish programs resulting in creating a positive impact on the business and homeless communities. It was in this role where Juliana met CCC. She was present at one of the program graduations for CCC’s Community Volunteer Corps (CVC) and was so moved by the experience, she vowed to join in CCC’s mission if the opportunity ever arose.

Juliana believes it’s the opportunity of a lifetime to join an organization successfully changing people’s lives with their services and programming. Wayne joined CCC as the Chief Information Officer in January of 2020.  He is responsible for all of CCC’s information technology strategies, projects and related operations.

Wayne brings over 25 years of experience delivering information technology solutions and services in the health care industry including roles as Chief Information Officer and Chief Operating Officer in the healthcare, health insurance, mobile communications and retail industries.  He’s been recognized throughout his career for leveraging technology in innovative ways to help organizations transform their operations and capture improvements in quality and cost. He’s very proud to be part of CCC’s highly motivated and passionate team and leverage his experience and expertise to improve the services CCC provides to our clients.  Wayne holds a Bachelor of Science in Technology Management.

Wayne resides in Tualatin, Oregon with his wife of 40 years and is the proud father of three children, five grandchildren, and another one on the way.

Central City Concern receives Department of Health and Human Services funding and has federal Public Health Service deemed status with respect to certain health or health-related claims, including medical malpractice claims, for itself and its covered individuals.